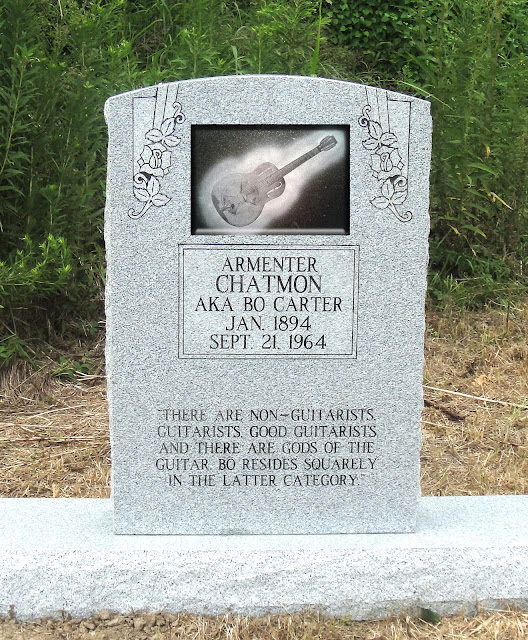 An estimated seventy people attended the dedication of Bo Carter’s headstone in Nitta Yuma, MS, including friends from California, Washington, Michigan, Georgia, and Mississippi. Nitta Yuma is a hamlet of maybe twenty inhabitants, on an old plantation in Sharkey County, Nitta Yuma Cemetery sits tucked into the corner of a huge field of corn and flush with Deer Creek., and we all drove through dusty paths to get there.

DeWayne Moore, director of Mt Zion Memorial Fund, which erected the monument and organized the dedication, spoke about the marker of Sam Chatmon in nearby Hollandale, and how working with locals on that project inspired this project. He also stated that the monument would serve to protect the cemetery from agricultural encroachment, as it sits on the edge of a large cornfield. Next to speak was Henry Vick Phelps III, owner of the plantation, who cooperated with the Mt. Zion Memorial Fund.

Miles Floyd prepared an amazing speech about his step-father, Ezell Chatmon, who had on his deathbed made him promise to fulfill three wishes. He wanted him to take care of his grandmother, take care of his mother, and make sure that Bo Carter gets the recognition he so very much deserves for his amazing recording career. Breaking into tears as he talked at the end, he stated that the marker was one more step towards completing the last wish and concluded: “Bo, I’m proud to be your grandson, very proud. And I can’t wait to get to Bolton, Mississippi, stand beside your son’s grave, and say your three wishes…have been fulfilled. Thank you.”

Mr. Floyd wanted his lawyer, Barry Shrum, to say a few words in the absence of Patrick Leblanc, a Greenville native and friend who has been helping to recover royalties made form from Eric Clapton’s “Alberta, Alberta,” which is actually a reworded cover of Bo Carter’s 1928 classic “Corrine Corrina.”

Alan Orlicek, the new engraver for the black granite, came up and helped unveil the headstone. Everyone was impressed with the marker and rushed to look at it and pose for pictures. A local politician had asked to say a few words in the spot on the program set aside for special guests, but about fifteen minutes after the unveiling, Cheseborough grabbed the National and started playing and singing, “I Want You to Know.” The crowd applauded at the end of the tune, and I didn’t want to interrupt at that point. I’m glad to hear it worked out well.

Cheseborough spoke and invited Bill Gandy, owner of Bo Carter’s guitar, to speak as well, asking him to tell the story of how he happened to acquire it and later discover its history. Beforehand, I had spoken to Gandy and he told me about bringing Kenny Brown (Gandy’s neighbor, companion on the drive from Potts Camp to Nitta Yuma, and longtime R.L. Burnside sideman) to the event. Brown and I had recently discussed the headstone dedication of Joe Calicott back in the 1990s, and I intentionally left them off the program as a pleasant surprise to all those in attendance. Kenny Brown did not fail to wow the crowd using his metal slide on the National of Bo Carter and playing a tune by Muddy Waters.

Bill Steber and Ron Bombardi performed an amazingly stellar rendition of “Sitting On Top of the World.” Even though we had never discussed playing only one song, it was interpreted that the popular song title underneath their names on the program meant their set needed to be limited to that song only. Moses Crouch sang “County Farm Blues” and then Andy Cohen led all the musicians in “Corrine Corrina,” which the musicians tried to get the crowd to sing along on, but they never could get together on the words themselves. The event, nevertheless, was perhaps the most heavily attended and most rural of my tenure. Andy Cohen was amazing

Then we all trucked out of the cemetery, up the hill to Nitta Yuma proper, for a reception in the chapel, where Andy Cohen was sitting up front playing for a dozen or so people. He took turns doing songs with Steve Cheseborough, who stuck rigidly to Bo Carter while Andy did Rev Gary Davis and Lonnie Johnson in his own style. When Miles Floyd and his family came in Cheseborough played “All Around Man,” Miles’ favorite Bo Carter song. He loved it. He even had it engraved on the back of the marker.

Another highlight was meeting Leslie Miller who brought two photos of Bo Carter playing for her and other local children in 1956! He was playing the National. He wore coveralls in one picture, as if he had come from work as a mechanic. In the other he is dressed up and accompanied by a fiddler. I asked about the repertoire. She said he would start with “Tennessee Waltz,” saying his other songs were too dirty for children! But he also played other songs which she doesn’t remember. She said it was a frequent event, his performances in the area. She is going to talk to a woman in her 90s who might remember more about it, and get back to me with any info. 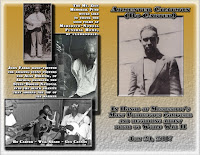 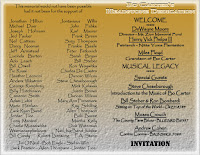 You can view his entire discography (courtesy of Stefan Wirz) here
Or view Elaine Hughes account of Bo Carter performing at her house in Vicksburg. 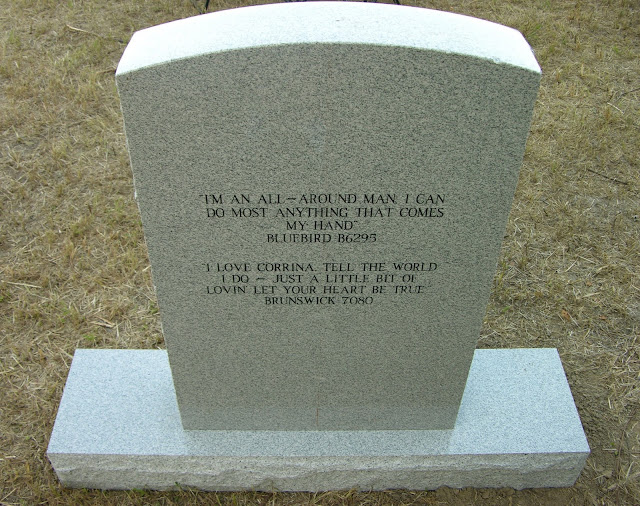